Don’t do it! It’s scary out there! 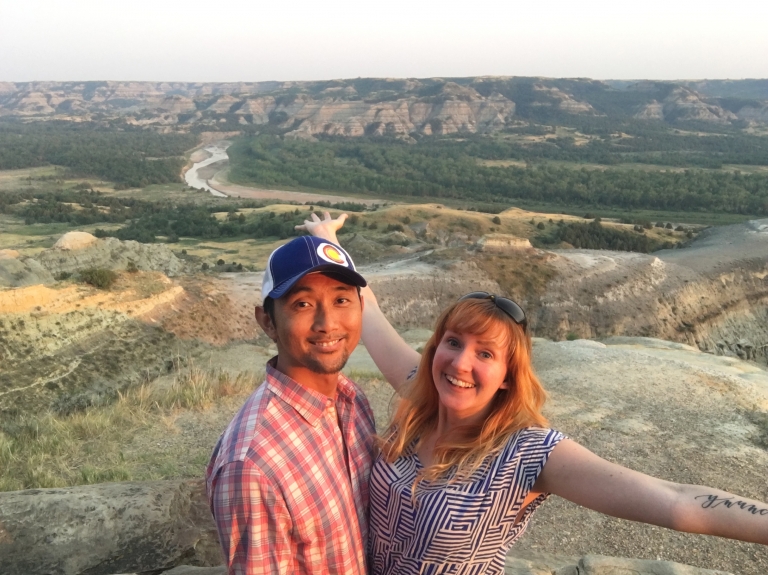 I’m sitting on the picnic table in front of Gulliver at 6:45 AM in Medora wearing shorts and my Nike workout shirt that I rarely ever work out in. Maybe I should just call it a shirt. If I were being more accurate, I think I’d call it my I-never-really-wash-this shirt because I don’t honestly know when the last time I washed this shirt was! Gross, I know. But seriously, guys. It’s totally breathable. I’m disgusting sometimes, but whatever.

It’s surprisingly chilly for it being in the mid 90s here every day since we got here a couple of days ago. It’s our last day before pushing off to Rapid City tomorrow. I can’t say that Teddy Roosevelt is my favorite of the National Parks that we’ve been to. It has eerily strange rock formations that remind me of the beach for some reason. I think it’s because the erosion-created badlands that have been permanently petrified here remind me of the way the sand looks on the beach as water finds its way back to the ocean.

I’ve read that this area was one covered in glaciers. It’s hard to believe – but that was a different time and place. I’m sure the landscape looked much different than it does today.

It’s been 102 days since we left Denver. And as much as I miss it, I don’t miss it. I’m having a really awesome time out on the road with Annabelle. And I guess Cowboy too despite him being totally aloof and not dog-like at all. I guess it comes with the territory of being a cat.

I love that we are just able to hang out in new places almost every week. I think if we were to continue to do this, I would want to pick a spot to stay at for at least 3 weeks at a time, maybe even a month at a time. The thing that’s hard is that it takes a lot of effort to drive to these places – an entire weekend of driving sometimes – and we’re only there for a few days or a week at most. In the case of Medora, ND, we’re only here for 3 days. Not that there’s so much to do in Medora. Not even a month’s worth of things to do I would say. It’s a tiny little town where the gas station I filled up at yesterday still used the old-timey pumps where the numbers actually rolled around. But at other places I would have liked to explore a little more. Maybe stay and become part of the community, even if it’s only temporary. You can’t really do that in 3 days or even a week – not even a month really, but a month at least gives some idea of the community.

We will be going to Burning Man in about 4 weeks from now. I’m super excited about it, but I don’t think Annabelle is not as excited as me. I think she’s humoring me about it and, in fact, has said that she’s excited “because I’m excited.” What she really means is that she’s just going because I want to. She hasn’t ever been so it may just be because it’s new to her and NOT going is more comfortable than actually going. It might not be her scene necessarily but I think once she’s there, she’ll really enjoy it. I know I did.

I remember having a lot of hesitation at first too. Part of me didn’t want to go and that year, 2015, I created a lot of excuses in my head of why I shouldn’t go even after I had bought the ticket. There’s too much logistics to think of; what am I going to eat?; what will I sleep on?; how much water do I bring?….

There were pictures of the playa in July 2015 showing swarms of locusts (or some kind of insect) and I was like, “See! There’s no reason to go to Burning Man. Look at all of these bugs!” The days kept coming, John gave me the countdown to when the Man burns, the bugs subsided, and I kept hanging on to the idea that there was still some excuse for me to stay home. To not leave. To be safe in my Denver bubble where I could do the thing that I’ve always done and “not be dirty in that playa dirt or dust or whatever it’s called!”

But then I decided, “To hell with the bugs and that damned dirt!” And I went. And it was awesome! I was so glad too. The memories that I got from that trip will be with me for the rest of my life. I saw and experienced things that I’d never experienced before. I created connections with strangers who are now my friends. I saw beautiful works of love that people made JUST to display for one week at Burning Man – and then they burned. Because that’s what happens at Burning Man – things burn.

It’s a microcosm of sorts. Yes, there are the huge parties, the naked people, the freaks and weirdos. But Burning Man also shows you that you MUST create something awesome and beautiful and share it with the world because one day – and one day soon – you will be gone, never to come back, with only the ashes and memories left behind.

Annabelle and I were talking about this the other day. This RV trip will turn into memories that will be with us for the rest of our lives. And thanks to things like this journal, the pictures we post on social media, and our podcast, we’ll be able to look back in perpetuity and listen to and see our younger selves, and know what we were thinking, doing, and seeing. Our children, and our children’s children, and on and on (maybe) will know us and can reach back through time to be here with us.

As I sit on this picnic table right outside Gulliver, taking in the early North Dakota sunrise, listening to a family of 3 brothers and their dad playing basketball in the playground, I can almost see my future grandchildren with me, smiling, thinking, “How cool was that trip?!” They may even think about doing something like this on their own. They may make excuses as to why they shouldn’t go, but I hope they’ll decide to do it anyway. It may not be an RV trip. It may look like moving to a different part of the world, or becoming a Park Ranger, or whatever they want to do – whatever seems scary.  Hopefully they won’t want to stay and be safe in their little bubble – wherever they are – and decide “To hell with the bugs and the dust! I’m going!”